Objective: Following along a tutorial to build a bot is one thing – but it’s important as a new bot developer to understand the Control Room, understand how the development interface is laid out, and understand the flow that bots typically follow from ideation to public check-in and deployment.

The Control Room is the central interface for all things bot management, global value creation, user management, deployment, and testing. All that said, dependent on your role within the organization – you may or may not see all of those capabilities from the Automation 360 Control Room interface. While most of your time as a bot builder will be spent in the Bot Editor interface, it’s important to recognize what else can be done from the Control Room itself. Taking a look at the tabs you most likely have access to as a developer (again, if you don’t see all of these tabs in your interface, it’ts ok – thats controlled through your role…its most important just to understand whats possible from this interface as this point) :

Let’s dive a bit deeper into a few of these topics by reviewing some of the following materials:

Take a look at the Automation 360 Control Room overview from the documentation portal.

Get started with the Automation 360 Bot Editor

As mentioned, the Bot Editor is where bot builders will find themselves spending a majority of their time. Watch the following video on How to Get Started with the Bot Editor in Automation 360. 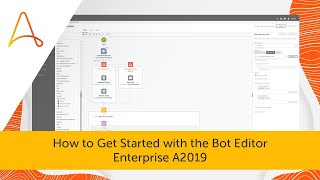 Explore the Options for Expanding the Capabilities of your Control Room 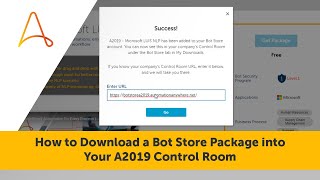 In order to successfully build, test, and manage bots – its important to understand the tool you’re using, its capabilities, and its features. As you creatively approach automation opportunities within your organization, be thinking back to the capabilities of Automation 360 and how you might leverage different bot capabilities and different product features to automate everything from simple tasks that need to run once a week to complex automations that leverage Bot Store custom packages and Workload management capabilities.