You’ll need to have Automation Anywhere Enterprise v11 workbench installed and licensed with a bot creator license to follow along with this lab.

Our fake company has received several invoices from foreign companies. As such, the invoices are all in GBP instead of USD. In this lab, we’ll create a bot to read each line from an HTML table to extract out the invoice amount in GBP as well as the invoice date. We’ll then need to use a Bot Store currency conversion app to convert the extracted GBP to USD based on the conversion rate when the invoice was received. Extract the data for all 5 invoices, convert them to USD, and submit to complete the exercise.

Let’s start with our pseudocode again. Remember, think of pseudocode as the human readable steps that our bot will need to accomplish. To get started thinking about the steps we’d need to take – look at the exercise page to understand the specifics of this exercise. 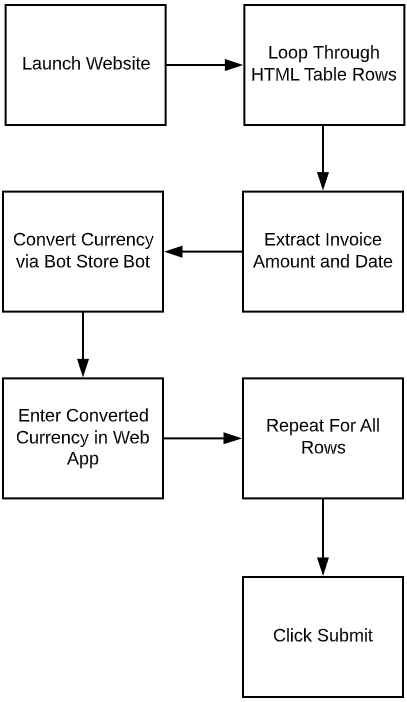 Step 1: Launch Website – We’ll have to have the website open before we can start extracting or entering data.
Step 2: Loop Through HTML Table Rows – There are 5 rows of invoices we want to extract, so we’ll need to be able to interact with them all without having to write 5x the code.
Step 3: Extract Invoice Amount and Date – We’ll be reading the values from 2 different columns in the table for the currency conversion.
Step 4: Convert Currency via Bot Store Bot – We’ll leverage a pre-built Bot Store bot to help us with the back dated currency conversion.
Step 5: Enter Converted Currency in Web App – Once the converted currency comes back from the Bot Store bot, we’ll need to fill it into a web form field for each row.
Step 6: Repeat for All Rows – The extraction, conversion, and data entry will have to happen once for each row. We’ll discuss using a concept of repetition to prevent us from writing 5x the code.
Step 7: Click Submit – Press the Submit button once our bot done entering data for each row.

We have a good start on our requirements, and we understand what needs to happen for this exercise to be completed successfully. We’ll be building from scratch on this one, so we’ll need to create brand new bot.

WAY TO GO!!! You just created a dynamic (and frankly pretty complex) bot! There were a lot of new concepts that we introduced with this lab – so be proud of your bot and go show it off. We used some new commands we hadn’t used before and learned to integrate a subtask into our automation. Creating and using subtasks is a great way to design your bots with reusability in mind. If there are things you need to do over and over that don’t have a ton of variation in them, they may be a good fit for a re-usable subtask. Additionally, using bots from Bot Store is a natural step to accelerated bot building. Make it a habit to check in Bot Store as you start a new project to see if there are bots that can help with building your bot more quickly. Lets recap cover a couple core concepts that we learned

Problem Solving Concept – Repetition
Repetition in problem solving allows us to repeat a series of commands until a certain condition is met. In our case, it was to repeat the commands 1 time per row in the HTML table. Using our Message Box commands, we also saw how important it can be to make sure that we know exactly what is happening in each iteration of the loop – and that we can use selection statements to run (or not run) certain commands each time the loop iterates.

Bot Building Technique – Dynamic Commands
In our other labs, all our commands were pretty static…in that if the number of fields changed, or we had to interact with a new field, we would have to make changes to our bot. In this lab, the bot was created somewhat dynamically – in that if the invoice table had 10 rows or 5 rows, the logic would still work, and we wouldn’t need to update our bot at all! Its not something that can be easily done (or done at all) in all situations – but as a bot builder, you should always be looking to get things done as dynamically as possibly keeping in mind possible changes that the application/web page may see.

Bot Building Technique – SubTasks
Subtasks allow for developers to create compartmentalized logic that can be re-used in multiple bots to help speed up the bot building process. In this exercise, our subtask came from Bot Store. In your own RPA initiatives, you may use a mix of Bot Store bots as well as sub tasks that have been created to accomplish objectives specific to your internal applications. Keep the concept of subtasks in mind as you start to build bots and see where particular tasks are the same and happening over and over. A page login, doing a lookup on data, data conversion…all of these could be examples of where a subtask could be created to help speed up your bot building process.

Excellent work on this lab. If you haven’t done so, I’d encourage you to go and look at the “Want some more practice” sections on this, and the other tutorial pages to further solidify your understanding on some of the topics covered. Go build on the things you’ve learned here to create awesome bots and Go Be Great!
Want some more practice on this page?