Setting Up and Using the Salesforce Connector Part II

Setting Up and Using the Salesforce Connector Part II

Create a User & Role in the Automation 360 Control Room

The Automation 360 Control Room uses RBAC (role-based access controls) – which means roles can be created that grant one or more permissions related to Control Room functionality – and those roles can be granted to one or more user accounts. It’s a good practice when using RBAC to create roles that contain ONLY the minimum permissions needed to accomplish the goal of the role – in an effort to minimize permissions that may be incidentally granted to users who don’t actually need said permissions. In step with that recommendation, we’ll be following the documentation for this one which walks through the process of creating a user and role for establishing a connection between the Automation 360 Control Room and the Salesforce environment. The same is covered in the video above if you prefer to watch this done, but the documentation is quite good here as well.

Create a Custom Roles for RPA Bots for Salesforce Connector

Note on the User Account: Later in this tutorial, we’ll establish a connection between the Salesforce environment and your Control Room. As a part of that process, you will be prompted to provide the username and password (or optionally API key) for this account – so make sure you hang on to the account details.

In part I of our tutorial series, we left off at the point of initiating the install of the Salesforce connector from AppExchange. With that connector/app successfully installed, we now need to start setting it up. If you click the launcher icon (3×3 colored circles in the top left corner of the Salesforce lightning setup screen), you can search for any Salesforce objects/apps – type in RPA and you should see the recently installed RPA Bots for Salesforce app with the Automation Anywhere logo. Right-click this app and select to Open in New Tab as we’ll need to go back and forth between the setup of this app and the Salesforce lightning setup screen as we begin to establish the connection between the Salesforce environment and our Control Room.

The first thing we need to do is configure the app itself. On the Salesforce Connector App page, click the App Settings tab along the top of the screen to begin setting things up. The App Settings page will prompt you for some details we established from the setup we did in part I of this tutorial series – the Certificate API Name and the Connected App Consumer Key.

Taking a quick step back – why do we have to do these two things? What we’re doing here is establishing some values that the RPA Bots for Salesforce app can use as it securely brokers the connection between the Salesforce and Automation 360 environments. Even if you dont expect your bots to be used for updating Salesforce object properties, this connection is still required for the Control Room to be able to call back to the Salesforce environment, letting users know that the bot has executed successfully/finished.

Repeat this process to create a Remote Site Settings profile for Salesforce as well. Assuming you’re using Salesforce cloud, the URL should be https://login.salesforce.com, and the Remote Site Name can be whatever you’d like. This will be important for the connection to work both to and from Salesforce to our Control Room.

Create an In-App Connection to the Control Room

Note: You can use either a password or API key to establish this connection to your Control Room. Micah’s view is that an API key is best – so that should your password ever be reset/expire, you wouldn’t lose the connection established between your Control Room and Salesforce environment – and so that should someone else be doing this part of the setup for you (a Salesforce admin) – you don’t have to give out any passwords. On the flip side, you would lose any established connections if you ever generated a new API key for that same user account, so be aware of that before re-generating a new API key. If you’re not familiar with the process of generating an API key for your account, Micah shows this exact process at the 13:50 mark in the video above.

Once the above details are provided – press the Connect button to test the connection. Should everything work smoothly, you’ll be greeted by a message indicating that your Salesforce environment is now connected to your Control Room. If this connection was not successful, be sure that you’ve appropriately whitelisted your Control Room and are using the appropriate user details/role.

In order to set up the Bot Configuration in the RPA for Salesforce connector, we’ll need to have at least one bot to test with. In the video above, Micah creates a dummy bot (at the 16:00 mark) that is designed to take a couple of values as input – so that we can see data being mapped from Salesforce to our Automation Anywhere bot. The example bot takes in an sID and sDescription – both marked as input variables. We won’t go over the process of building out this bot in the written tutorial here, but watch the video above if you want to see how Micah does it (spoiler alert: it’s just a bot that takes in two input variables and displays them in a Message Box). One final note on the bot creation side of things: in order for you to be able to see your newly created bot from the RPA for Salesforce Bot Configuration, your bot will need to be checked into your Control Room’s public repository. Private bots can not be configured with the RPA Bots for Salesforce connector.

Once both of those values are set, you’ll see a quick loading page appear – where the RPA Bots for Salesforce app is actually connecting to the Automation 360 Control Room and pulling back all of the bot/folder names from your Control Room’s public repository. Select the demo bot that you’d just created (or a real bot if you’re setting this up for actual use) by navigating to the bot in the Control Room hierarchy presented in the app.

With a bot selected, we’ll also need to fill out the run detail options. Bots can run on server (unattended bot runner) or run locally (attended bot runner). Additionally, we’ll need to select the run as user (under which context should this bot run) and the device pool (optional – if you’re using device pools, this enables any triggered instance of the bot to be sent to a pool of runners as opposed to just a single device assigned to the selected run as user). Finally, select how the bot can be deployed – either by user and/or by flow. By user means that an RPA for Salesforce widget can be added to the Salesforce interface and users can initiate bot runs from there. Running by flow means that bot executions can be kicked off from flows built by Salesforce’s flow builder capability. One or both of these options can be selected. Press the Next button to continue. 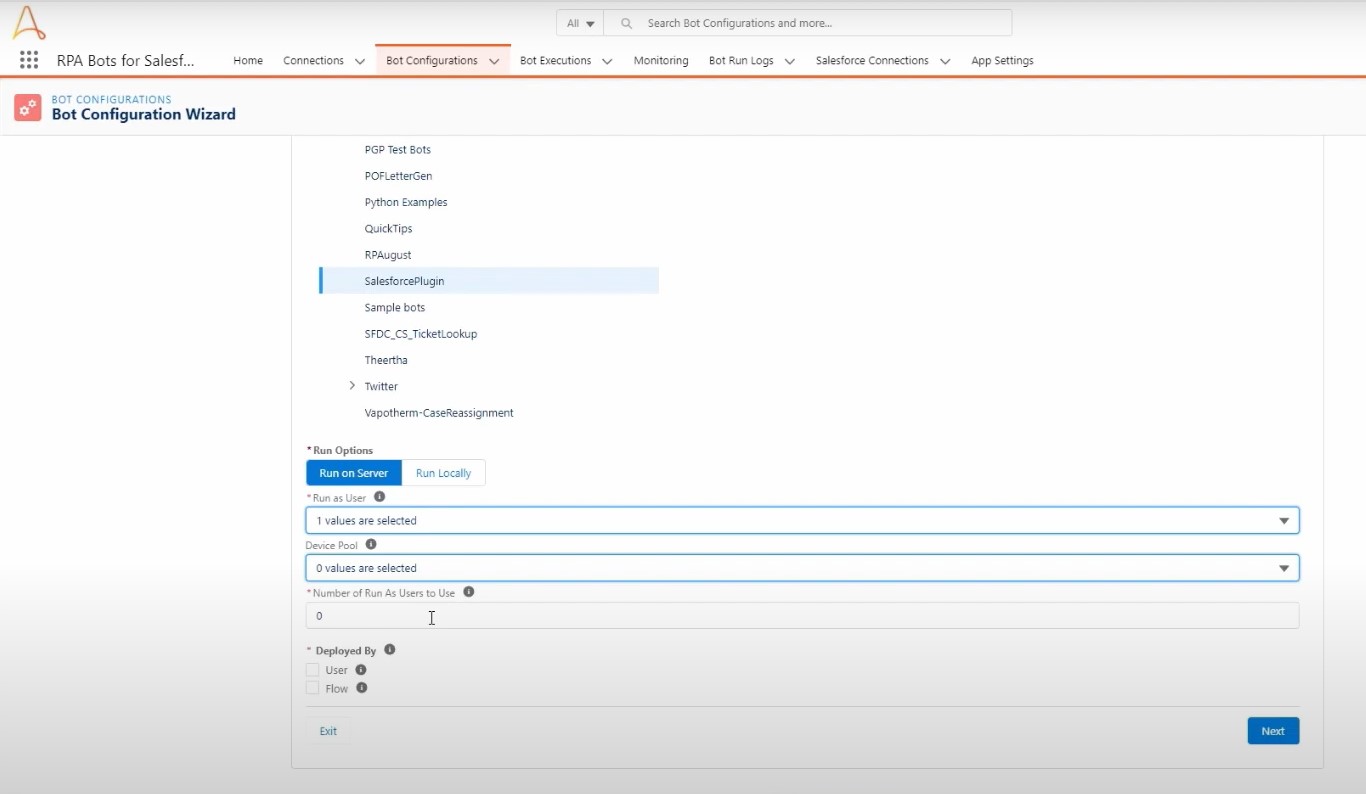 From the Object Selection and Field mapping screen (part 2 of 3 in our Bot Configuration setup) – we’ll be able to determine which Salesforce object/values will be sent to the bot for its execution. Note that this will only work because we enabled 2 input fields on the bot we’d selected in part 1 of our Bot Configuration setup…if no input variables were available on the selected bot, there wouldn’t be anything for us to map values to on the Automation 360 side. In following along with the video tutorial above, select Case for the Object type, and click the Add a mapping button to add the following mappings between the Automation Anywhere fields and Salesforce Fields.

Note: For the Mapping Type field, we used SF Field to indicate that this value would be mapping a property from the selected Salesforce object to our bot. If we wanted to have an input field for our user to fill in instead of a direct SF field mapping, we could have selected Input for the mapping type instead and the user would be presented with an input field as a part of the Bot Launcher UI.

Our final step in setting up our Bot Configuration for this tutorial is to enable the mapping of fields back from our Automation Anywhere bot to our Salesforce environment. For the purposes of this demo, we didn’t set up any output variables on the demo bot we’d created, so we’ll skip this setup for now, but in part III of our Salesforce Connector tutorial series, we’ll be doing a full bot build which includes mapping values from Salesforce to Automation Anywhere and back.

The last part of our setup here is to add the RPA Bots for Salesforce connector to the Salesforce object interface. Since we’d set up our demo on the Case object and selected Deployed by User in our Bot Configuration, select a case in Salesforce, press the gear icon in the top right corner of the Salesforce screen, and select Edit Page. In the Components pane on the left side of the screen, scroll to the very bottom where you should see a section of Custom-Managed components. Click the AAIRPA Bot Launcher component and drag it onto the Salesforce App Builder interface – dropping it in a location that you think makes the most sense for your users to consume it. Press the Save button in the top right corner of your App Builder screen to save the new layout for Cases.

We’re finally ready to test. Using the Cases object, since that’s what we used in the written tutorial and video above, select a Case and ensure that the Automation Launcher pane appears in your user interface (you may have to refresh). The Bot Configuration we’d just set up should be showing with the name provided in the configuration setup. Press the Run button to initiate the bot execution. At this point, Salesforce will send a request to the Automation 360 Control Room to execute the bot we’d selected in the Bot Configuration setup, along with the values that we’d mapped to Automation 360 input values.

The Automation Anywhere Salesforce App enables organizations to quickly scale the consumption and use of RPA bots within the organization through seamless integration with Salesforce. This tutorial focused on the setup and configuration of the RPA Bots for Salesforce connector – and while it was a lot of work, fortunately, most of it was one-time setup kind of stuff. All subsequent bot configurations would only mean selecting a bot, determining runtime details, and mapping values to/from the bot. In our third and final tutorial in this series, we’ll create a real Automation 360 bot, check it into the public repo of our Control Room, and do value mappings both to Automation 360 and back to Salesforce so we can see the bot update a Salesforce Object directly in the Salesforce user interface!